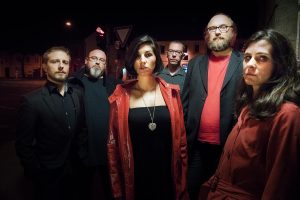 Formed in Bayreuth, Germany by classically trained keyboard player and multi-instrumentalist Andreas Hack, the band released their debut, Personal Effects Pt. 1, in 2008 via Musea. The conceptual work about the tragic story of two sisters in a futuristic setting was inspired by films like Bladerunner and Ghost in a Shell. The follow-up album, Personal Effects Pt. 2 was released by Cyclops in 2009 and once more showcased Frequency Drift’s talent for powerful, soulful melodies and atmosphere.

The 2011 album Ghosts… saw the first notable appearance of later band member Nerissa Schwarz (electric harp) as guest composer and musician, as well as an evolution towards an enthralling, melancholic mixture of art rock, ambient, folk and metal. …Laid to rest (2012, Gentle Art of Music) continued this path with world music influences and an even more varied instrumentation, featuring gemshorn, flute and clarinet alongside the harp and violin.

The international success of their albums earned Frequency Drift an invitation to play live at the 2012 edition of “Night of the Prog” festival on the famous Loreley open-air stage, a performance called one of the highlights in 9 years of NOTP by the festival’s manager in the German magazine Eclipsed.

Frequency Drift’s 5th album Over (2014) established a writing collaboration between Andreas and Nerissa and was marked by further experimentation with electric harp soundscapes and keyboard textures. An ambitious and eclectic work, Over offered a unique mixture of old school progressive rock, postrock, pop, classical and world music. In the same year, Frequency Drift released Summer, a wistful collection of previously unreleased songs, and was joined by drummer Wolfgang Ostermann, who brought fresh rhythmic drive to the music.

In the following years the band performed live at renowned international festivals, including Summer’s End (UK), 2 Days Prog + 1 (Italy) and Progdreams (NL), and as main act at the live club De Pul (NL).

2016 saw the release of their 6th album Last. Stranger and darker than its predecessors, yet still highly melodic, with stunning artwork and evocative lyrics, it was Frequency Drift’s most cohesive and cinematic work to date. Despite their obvious love for album titles suggesting death and finality, Frequency Drift stayed alive and kicking through several line-up changes.

In 2019, Frequency Drift were nominated for the prestigious Progressive Music Awards, another highlight in the band’s career. In the same year, Frequency Drift announced that there would not be another album or live performance. The band’s core members continue to work in other projects, both solo and collaborative ones.

This website uses cookies to improve your experience while you navigate through the website. Out of these cookies, the cookies that are categorized as necessary are stored on your browser as they are essential for the working of basic functionalities of the website. We also use third-party cookies that help us analyze and understand how you use this website. These cookies will be stored in your browser only with your consent. You also have the option to opt-out of these cookies. But opting out of some of these cookies may have an effect on your browsing experience.
Necessary Always Enabled
Necessary cookies are absolutely essential for the website to function properly. This category only includes cookies that ensures basic functionalities and security features of the website. These cookies do not store any personal information.
Non-necessary
Any cookies that may not be particularly necessary for the website to function and is used specifically to collect user personal data via analytics, ads, other embedded contents are termed as non-necessary cookies. It is mandatory to procure user consent prior to running these cookies on your website.
SAVE & ACCEPT